Get To Know Us – Jake MacLaren 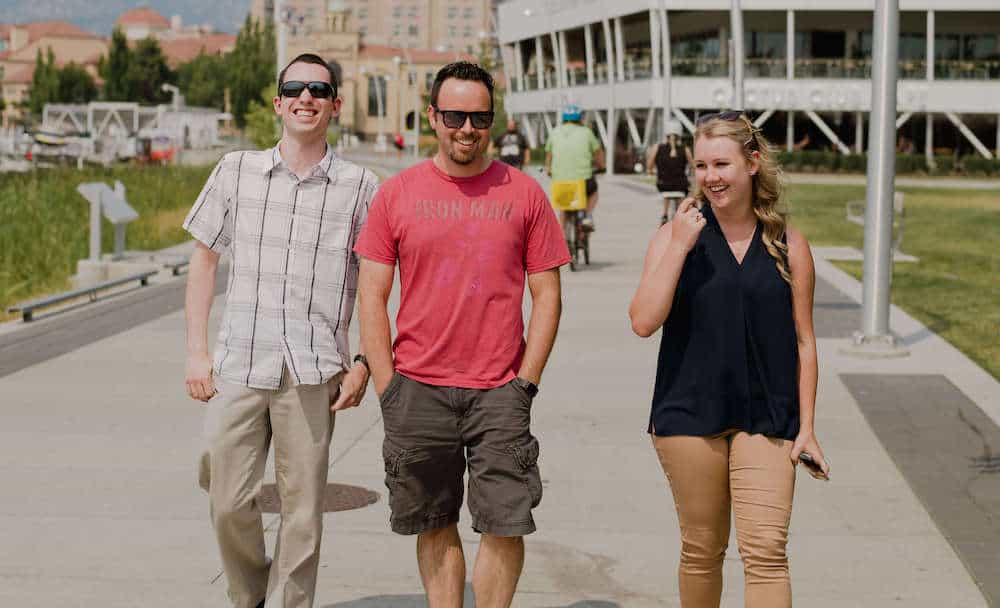 Jake: Huh… well this is a little strange, how’s it going Jake?

Also Jake: Very well thanks, and you Jake?

Jake: Also well. So let’s get into this, you handsome devil. You do a little bit of everything in the office, is that true?

Also Jake: That’s correct, I’d say the biggest “hat” I wear in the office is the role of a copywriter. Aside from that, I manage the Sayvee social media, client AdWords accounts for advertising in Kelowna and other areas, perform admin work for some of our automotive clients, and set up internal company meetings. Most recently I’ve also been organizing a big project coming soon for Sayvee.

Jake: Wow, that sounds like a lot! Good for you to be able to manage so many different moving parts on a daily basis. So what would you say you bring to the office in terms of personality?

Also Jake: Well, my friends would say I’m charming, kind, and easy to get along with. My co-workers would also say I’m quick to try and create fun events to bring out the office culture. I’ve also been told I have a great laugh. So basically I’m like a tier below Prince Charming overall.

Jake: Right… I’d say more than a few tiers there amigo. Come back down to Earth and eat your humble pie before your ego explodes like a watermelon hitting pavement after falling from 30 stories.

Anyway, let’s get into the meat of this interview: why did you choose to work at Sayvee?

Honestly, because they offered me a job. In truth, I had my eye on them as a company before I actually got hired. Fun fact: I was actually interviewed by them for a different position first and although I wasn’t the best fit for that position, they liked what they saw enough that they offered me an internship. The rest is Sayvee history.

That is a fun fact! In ten words or less can you describe your favourite part of your job?

Eating free bagels and hiding puns in our Sayvee content.

Jake of All Trades. Get it? It’s like jack of all trades… but with my name in the middle… yeah I know, I should really see myself out. Prepare yourself for even more puns, it’s only going to get worse from here.

Now we get into the real questions. First up: If you could have an unlimited amount of just one thing and have unlimited storage for it, what would it be?

Great answer Jake, what does your ideal dinner look like?

This is a tougher question than you’d think to answer. There’s so much good food out there it’s difficult to nail down exactly what it would be since it changes often. Currently, it would be at this amazing Thai restaurant I was introduced to in Kelowna. They have this spicy ginger stir fry I swear is like having the best party in your mouth ever. Of all time. Also, this ideal dinner would be with my close friends there as well, but I wouldn’t want to “Thai” them down.

Ugh, just for that you’ve been challenged to a duel by a mysterious stranger at this dinner, what would be your weapon of choice if it was a fight to the death?

Aw, really? I was enjoying the string beans. Well, it would probably be with an Epeé sword since I’m the most well-versed with that one in fencing. Which is really a sport more people need to try—it’s awesome, just saying. Plus we could have witty quips back and forth like in the Princess Bride or Monty Python and The Holy Grail movie, who doesn’t want to do that?

On a less challenging note, what’s one of the top five movies you’ve seen?

This is a more challenging note Jake and you know it. Anyway, it would have to be a tie between Back To The Future (the first one) and Indiana Jones: Raiders Of The Lost Ark. They’re both so good in their own ways it’s hard to choose one over the other. Plus both have such awesome soundtrack themes, you can’t help but sing it to yourself after the movie.

Probably something comedy-driven. That way I would have a significantly less chance of dying in it. Boom, problem solved (I think). As to what show specifically, that’s a little more challenging. The How I Met Your Mother universe would be fun (especially since my last name is the name of the bar in the show). Alternatively, Men At Work (a little more obscure of a show) would also be great. The guys on that show are hilarious.

Interesting choices, what would you name your spaceship if you had one?

Honestly, it depends: if we’re talking about some sort of spaceship just for normal space stuff (i.e. going to the International Space Station, etc.) maybe something like The Axiom. If we’re talking about a giant flagship for space war there are so many great names. One that comes to mind would be The Heart of Everest. Or even better: Infinite Magnitude. Honestly, I could spend all day coming up with ship names—none of them would be “ship”. Told you the bad puns wouldn’t end.

What mythical creature would improve the world the most if it existed?

Maybe unicorns, because I’ve heard their horns have healing abilities. On top of that they could potentially cure cancer or even other diseases. Plus, let’s be honest, most mythical creatures aren’t exactly known to be friendly towards people. The last thing you’d want to try and deal with are fields of minotaurs wandering around. You’d have way too much bu****it to deal with.

I’ve had a lot of crazy and weird conversations. Most of the time I’m the one starting them. Unfortunately, I typically don’t remember them after they’re over. The one we’re having right now would probably qualify though. Still good to spend time with a great guy like you, Jake.

Aw, thanks, Jake! Let’s switch back to marketing, what’s one of your favourite ads you’ve seen?

I personally believe ads that use humour make them stand out and make them more memorable. This ad by Subaru advertising the 2009 Forester is one of my personal favourites. You might’ve seen a similar scene done by guys in movies, but I doubt you’ve ever seen one like this with sumo wrestlers. Another one that stands out would be this chicken ad by Mercedes-Benz. Without a doubt one of the most original and hilarious ways to advertise a car without ever even showing the car itself.

A way to easily create content calendars for the month, get them approved by other co-workers, and get detailed analytics about all the synced social media channels. Most of what I’ve seen so far has either been a great content calendar program or a great social media analytics platform. Having both in one piece of software would make it much easier to create social media, and quickly check what’s working best to optimize for future content.

Thanks for taking the time to answer, Jake! I always enjoy our talks. Look forward in the coming months to more interviews with the simply swell, superb, and savvy Sayvee team!

Andrew likes to write. And that's a good thing because he's good at it. He likes Canada, the UK, and of course, pop tarts.
PrevPrevious2019 Marketing Trends And How They Affect You
NextHow To Make Unboring VideosNext