Get To Know Us – Maurits Nienhuis 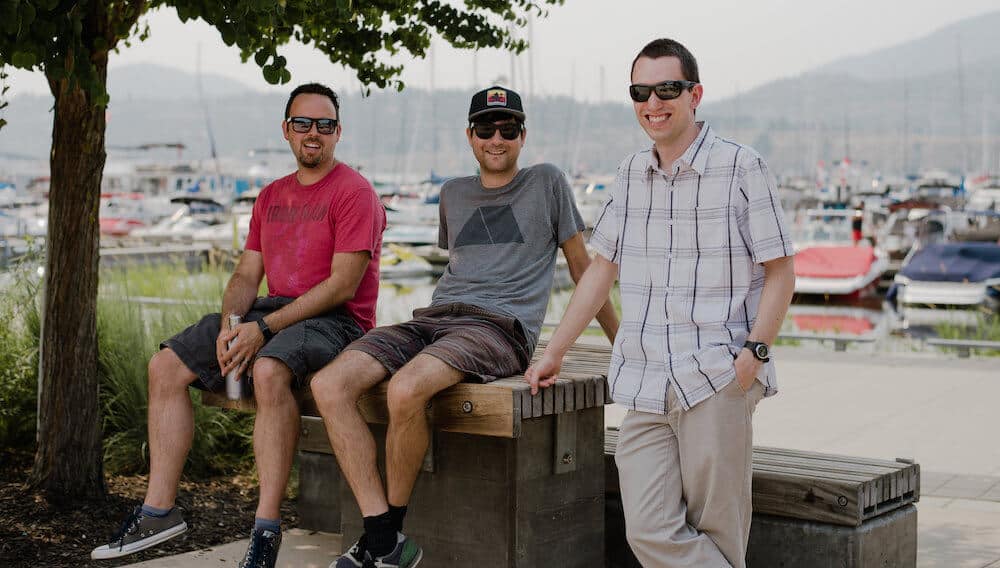 At Sayvee, we pride ourselves on offering the very best branding and visually creative materials for any and all projects—this ability stems from our incredibly talented graphic designers. Through some strange trick of the universe, both our designers are named ‘Mau’. One is Maurits (Dutch) and the other is Maurizio (Italian). When soccer season rolls around, things can often get a little tense.

Our highlighted employee for this month is our original graphic and web designer with Sayvee in Kelowna: Maurits Nienhuis.

Mau uses his keen eye, creative mind, and attention to detail to bring a unique look to each and every project he works on, and his work speaks for itself. Our clients know and appreciate the work he does for their companies. His designs can be found on websites, billboards, and in publications and magazines all over Kelowna, the rest of Canada, and the US.

A talented musician, Mau is a man of obsession. Not only is he a bit of a design perfectionist, he’s also a prominent member of the John Mayer fan club (not really, but he truly loves the dude), and has an unhealthy obsession with guitar pedals (like seriously, it’s a problem). Mau lives in Summerland with his wife and their furry dog child, Asher. Learn more about him in this week’s Q&A.

So Mau, why did you choose to work at Sayvee?

When my wife and I moved from the Netherlands to Kelowna back in 2013, I got connected with the sweetest little network of people. Josh, the General Manager at Sayvee, introduced me to Sayvee and after hearing about them wanting to expand the design department, I showed them my interest and the rest is history! I’ve been part of the team for over five years now and I’m super thankful for the opportunity this place has given me.

Alright, now we get into the real questions. First up: if you were a sea creature, what would you be and why?

No holds barred, what would be your ideal sandwich?

Surprise! The sandwich was a ruse and you’ve been challenged to a duel by a mysterious stranger. What would be your weapon of choice if it was a fight to the death?

My Fender Strat. I’ve seen the (unplanned) damage the headstock of a guitar can do in live situations. If needed, I could set the mood with the “The Good, the Bad, and the Ugly” theme.

On a less challenging note, what’s one of the top five movies you’ve ever seen?

Office conversations on this topic always end with me crying in a corner as most of my coworkers like to make fun of my minimal watch hours and excellent taste in humour.

Parks and Recreation. I’d start a band with Andy, and Ron would be a great mentor/drinking buddy. The show is about a place called Pawnee and in many ways it reminds me of where I live (Summerland) with its small-town politics. Actually, it might’ve inspired me to move to this place.

What would you name your helicopter if you had one?

“Op Hoop van Zegen” (Dutch version of “Hoping for the Best”—helicopters are cool but creep me out a bit).

If you had to get rid of a holiday, which one would you get rid of? Why?

Canada Day, we should always be celebrating this country! Though, I think many Canadians are already great at being proud of this place with their outdoorsy lifestyle so I guess we’re good.

Anyways, let’s just keep this holiday, shall we?

One day, an ex-colleague bought himself a camera but didn’t want his wife to know about the purchase. When he brought it home he told her (without my permission) that he borrowed it from me. A few days later his wife dropped by at the office and she started to thank me for lending them my camera and I obviously had no idea what she was talking about. I mumbled, “Yeah no worries,” and changed the subject as I didn’t feel like throwing him under the bus.

That was a weird conversation for sure. I wonder what else I’ve “lent” him. By the way, thanks for the reminder. He still needs to return that camera, along with my mountain bike, and that MacBook Pro…

Their tagline “Even Apeldoorn Bellen” (“Let’s make a call to the Apeldoorn guys”, Apeldoorn being the city Centraal Beheer is based out of) has become something people jokingly say when something goes wrong.

I like all tools that help bridge the gap between the programmer and designer. Software like Adobe XD (or Sketch) has definitely been a step in the right direction when it comes to creating web-based designs so let’s hope this is only the beginning.

Thanks for taking the time to answer Mau! Look forward in the coming months to more interviews with the simply spectacular, smart, and savvy Sayvee team!

Andrew likes to write. And that's a good thing because he's good at it. He likes Canada, the UK, and of course, pop tarts.
Read Full Bio
PrevPreviousHashtags Or Connections?—Your Social Media Marketing Guide Done Right | Part 2 of 2
NextBuild Your Brand—10 Tips For Instagram StoriesNext

Your business can’t wait for a cure or a return to “normal”.
Now’s the time to Get It Right! Rewrite your marketing playbook with these proven strategies to generate leads and multiply sales.